Since 1997, Harry Potter has regaled the literature and film crowd with broomsticks, magic wands, house elves, horcruxes, invisibility cloaks, talking spiders, and flying cars. In 2001, Lego got into the wizarding action with the release of the Lego Harry Potter line. Since then, both Lego fans and Harry Potter fans have had much to rejoice about, with the development of a broad variety of sets and minifigs that have delighted and entertained even the staunchest muggle. 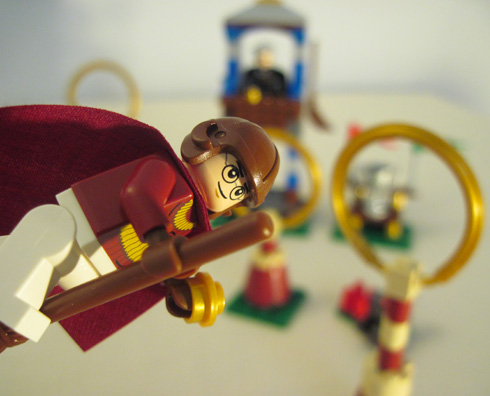 The Lego Harry Potter line is a showcase for some great Lego work. The original sets started in 2001, before the new “flesh-tone” faces. The traditional yellow Lego heads has proved problematic for replicating the look of a real-life individual, and most of us have heralded the skin colored faces as an improvement to the feel of the licensed Lego themes.

TLG designers has paid attention to the wishes of its fan base with the development of the Lego Harry Potter sets, especially with the 2010 release of 10217 Diagon Alley, a beautifully designed replication of the famed HP location. The three different buildings represented, Ollivander's, Borgin and Burke's, and Gringott's Bank, all exhibit stunning detail and fabulously creative building techniques, and are remarkable examples of some of the best buildings currently available in a retail Lego set. For a detailed review of this exceptional set, click here.

Of course, the most recognizable building in Harry Potter’s Wizarding World is Hogwart’s School of Witchcraft and Wizardry. This iconic building had been duplicated several times in the Lego theme, but the best representation to date is, in my opinion, the recent 4842 Hogwarts Castle. Click here or on the picture below for my full review of this magnificent set. One of the nice things about the set is the way it perfectly represents the famous Hogwarts profile from the outside, while the inside is built as a minifig playset and shows several details of the castle interior very nicely.

As I understand, the upcomand add to the size of the layout. One of the things I especially like about the recent Lego Harry Potter sets is the use of a unified color scheme across different HP sets. Take, for instance, the 4736 Freeing Dobby set.

Notice how the colors and design are the same as found in the 4842 Castle, and the 4867 Battle of Hogwarts. The design uniformity helps to give a continuity across the different sets and allows for greater display potential.

Speaking of the Freeing Dobby set, my one beef with the licensed themes is the reuse of the same minifig over and over. For instance, the HP theme has beaten to death the Harry Potter fig in his Gryffindor uniform, and set collectors wind up scores of the same minifig when they buy all of the sets in a theme.

Also included in the set is a phenomenally designed Luscious Malfoy minifig, who also appears in the 10217 Diagon Alley and 4867 Battle of Hogwarts. I understand making rare minifigs more accessible by including them in lower-priced sets, but after a while the repetitiveness become tiring. A little tweak of the character design would go a long way to helping a collector feel as if he was getting his money’s worth in buying all the sets in a particular theme, especially in Harry’s case since it seems he is destined to appear in every set.

All in all, though, the Harry Potter set line is great for both fans of J.K. Rowling’s series and fans of Legos. We’ve gotten some very fun set designs and some beloved characters forever immortalized in minifig form. To be honest, I’ve gotten into the Harry Potter theme more and more as the recent Lego Star Wars sets haven’t been that appealing to me. Hopefully the three sets released in the summer won’t be the last of the line. Even though the movies are ending, there’s still a lot of territory left unexplored by the Lego world.

An interesting little set from the Harry Potter line is the 4737 Quiddich Match. Check out my full review here. You get five unique minifigs and a few decent accessories. The great Hogwarts Castle in Lego form, with rare Dumbledore and Voldemort minifigs- check it out here!

Click here to return from ‘Lego Harry Potter’ to the ‘Brick-Building-Ideas’ Home Page.