Who can forget the joy of opening your first Lego set as a child? Of building a castle or pirate ship or space shuttle? 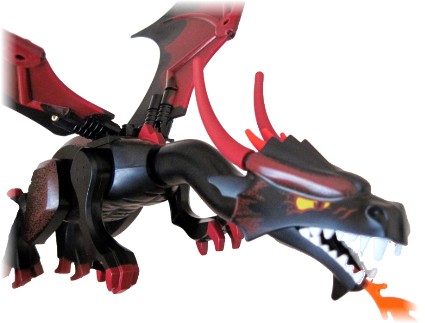 Yeah, now I'm 25 and I still like Legos. Ok? Seriously, there is something about Legos that transcends age, something that touches inside of us so deeply that we don't ever completely walk away from them. Maybe it's the joy of the ability to create whatever we want from just a few plastic bricks. Entire worlds and civilizations that we totally control can be created from sheer imagination; the only limit is the number of bricks and the time to assemble them. Maybe it's the wonder at the intricate designs of the masters of Lego building, or the tying of other childhood memories like Star Wars to Legos.

Whatever the reason,there is no doubt that these bricks and minifigures remain just as popular with adults as they do with children. This is a site dedicated to adult Lego fans who have reconnected with the joy of building using Legos, and finding just the perfect brick for that perfect Lego project. The site is designed around my personal (ever-expanding) collection and focuses on the sets and themes that I particularly enjoy. From time to time, I'll post reviews of recent releases and my own thoughts on some of the past and current Lego lines.

Currently, I am enthralled with the Lego Pirates of the Caribbean line. Some of the most solid sets in recent memory have come under this theme, and hopefully it only gets better with the release of the Lego Black Pearl later on this year. And the Jack Sparrow minifigure is to die for!

Of course, the traditional favorite Lego Star Wars is a hard theme to beat. Without a doubt, the sets that saved Lego from bankruptcy back in the 1990's and that brought the company to one of the top selling toy products in the world are the Star Wars sets. Though recently the sets have focused on the Clone Wars TV show (bleh) in the past Lego has produced some of its best sets ever under this line, like the 10188 Death Star and 10179 UCS Millennium Falcon.

Another commendable licensed theme is the Lego Harry Potter line. These sets are generally solid, and TLG does a good job of producing minifigures in the likeness of their movie counterparts. I especially like the current 4842 Hogwarts Castle.

The traditional themes like Castle, Space, and Pirates are not to be forgotten either. The Castle sets especially have a soft spot in my heart; I love the Fantasy sets from a few years ago and also the current Kingdoms line. And I'm a complete sucker for any type of Lego dragon!

To be honest, the City and Town Legos don't do all that much for me, although I appreciate the intricacy of the Modular Buildings and some of the other elements of those types of sets.

Legos aren't just for kids anymore. There are literally thousands of adults who have rediscovered the joy of building with Legos. This site is for you.

This site is under construction!

Star Wars Legos
Star Wars Legos has been the most popular Lego theme. Star Wars Lego toys have become valuable collectors' items and captured adult's and children's imaginations.
Batman Legos
Batman Legos have been consistent fan favorites since their initial release. Which are the best sets? Check out the reviews here!
Lego Harry Potter
Lego Harry Potter sets are great for both fans of J.K. Rowling’s series and fans of Legos. Check out the best Harry Potter Legos here!
Lego Pirates of the Caribbean
LEGO has outdone itself with the Lego Pirates of the Caribbean sets- and they are superbly well designed. Check out these pictures and set reviews here!
Castle Legos
Lego Castle Theme: Castle legos are still among the most popular Lego sets ever created. Classic Legos.
Who Invented Legos? Ole Kirk Christiansen
Short biography of the life Ole Kirk Christiansen, the man who invented Legos.
Sitemap
Check the Sitemap for a complete list of pages on Brick-building-ideas.com. Easily find what you are looking for here.
Contribute to Lego
Would you like to share your knowledge about lego? Great, find out how you can submit your story or tip here.